Services Provided by Public Authorities: Features of Legal Regulation in Ukraine and the European Union

The aim of the article is to determine: 1) the essence and content of services provided by public authorities in the European Union and Ukraine; 2) features of legal regulation of public service activities in these countries. To achieve this aim, general scientific and special methods of cognition were used, namely: dialectical, logical-semantic, comparative-legal, methods of analysis and synthesis.The article states that shortcomings in the field of public service have been inherited since Soviet times. The relevance of the European Union experience, where the defining feature of the development of legislation is its focus on ensuring the rights and legitimate interests of individuals in relations with public authority and its bodies, is emphasized. It is noted, that, unlike Ukraine, the European administrative-legal doctrine does not single out a separate legal institution of administrative services, and the category “service” regarding public sector is used in a broader and more flexible sense.It has been established that in the EU the issue of population services is regulated by both primary and secondary legislation. It was found that the legal regulation of public service activities in the EU is characterized by following features: the absence of a codified legal act that would regulate public services of non-economic&nbsp;interest; the impact of judicial practice on legal regulation of relations between public administration bodies and citizens; considerable attention is paid to improving the quality of public services and citizen participation in government decision-making.According to the results of the study, the priorities for the development of the administrative services system in Ukraine include the adoption of the Law (or Code) on administrative procedure and legislation on fees for administrative services (administrative fee) 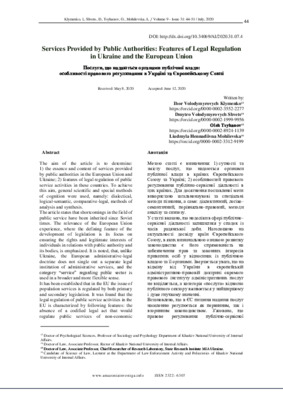 This paper was published in Revista Amazonia Investiga.