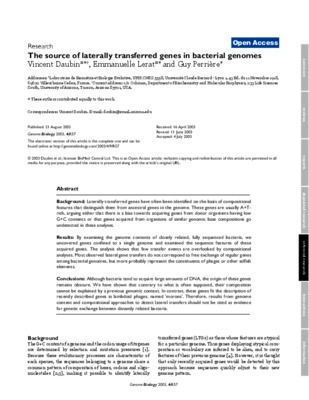 The source of laterally transferred genes in bacterial genomes

BACKGROUND: Laterally transferred genes have often been identified on the basis of compositional features that distinguish them from ancestral genes in the genome. These genes are usually A+T-rich, arguing either that there is a bias towards acquiring genes from donor organisms having low G+C contents or that genes acquired from organisms of similar genomic base compositions go undetected in these analyses. RESULTS: By examining the genome contents of closely related, fully sequenced bacteria, we uncovered genes confined to a single genome and examined the sequence features of these acquired genes. The analysis shows that few transfer events are overlooked by compositional analyses. Most observed lateral gene transfers do not correspond to free exchange of regular genes among bacterial genomes, but more probably represent the constituents of phages or other selfish elements. CONCLUSIONS: Although bacteria tend to acquire large amounts of DNA, the origin of these genes remains obscure. We have shown that contrary to what is often supposed, their composition cannot be explained by a previous genomic context. In contrast, these genes fit the description of recently described genes in lambdoid phages, named 'morons'. Therefore, results from genome content and compositional approaches to detect lateral transfers should not be cited as evidence for genetic exchange between distantly related bacteria