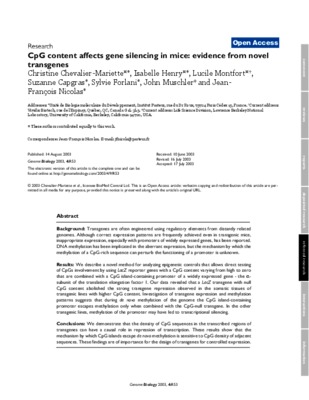 BACKGROUND: Transgenes are often engineered using regulatory elements from distantly related genomes. Although correct expression patterns are frequently achieved even in transgenic mice, inappropriate expression, especially with promoters of widely expressed genes, has been reported. DNA methylation has been implicated in the aberrant expression, but the mechanism by which the methylation of a CpG-rich sequence can perturb the functioning of a promoter is unknown. RESULTS: We describe a novel method for analyzing epigenetic controls that allows direct testing of CpGs involvement by using LacZ reporter genes with a CpG content varying from high to zero that are combined with a CpG island-containing promoter of a widely expressed gene - the α-subunit of the translation elongation factor 1. Our data revealed that a LacZ transgene with null CpG content abolished the strong transgene repression observed in the somatic tissues of transgenic lines with higher CpG content. Investigation of transgene expression and methylation patterns suggests that during de novo methylation of the genome the CpG island-containing promoter escapes methylation only when combined with the CpG-null transgene. In the other transgenic lines, methylation of the promoter may have led to transcriptional silencing. CONCLUSIONS: We demonstrate that the density of CpG sequences in the transcribed regions of transgenes can have a causal role in repression of transcription. These results show that the mechanism by which CpG islands escape de novo methylation is sensitive to CpG density of adjacent sequences. These findings are of importance for the design of transgenes for controlled expression