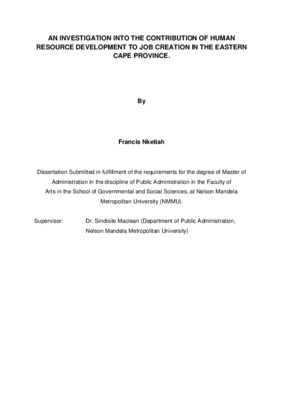 This study aimed at determining the contribution of Human Resource Development to job creation in the Eastern Cape Province. This investigation was done on how development in human resources in the Municipality (King William’s Town/Bhisho specifically) and the Province would help reduce the rate of unemployment in the Province of Eastern Cape in general. This research was necessitated by the fact that Eastern Cape is one of the Province with the highest level of unemployment in the country and Bhisho is the administrative capital of the Province. The study investigated the relationship between HRD and job creation in the Province. The statement of the problem, therefore, provided a foundation within which the aims of the study were explained. The significance of this research cannot be overemphasized especially against the backdrop of the intertwined society crisis of unemployment and poverty facing the Province. Although an extensive amount of research on HRD has been conducted, there is still no specific solution to how the human resource development contribute to job creation to reduce poverty and its associated social vices in the Eastern Cape Province. The objective of the study examine how human resource development can help reduce unemployment, discuss how stakeholders can help train and develop the youth especially the unemployed and to examine the relevance of human resource development to government department in King William’s Town/Bhisho. The nature of the study necessitated the use of questionnaires to elicit information from households. The researcher then presented, analyzed and discussed research findings. The nature of the study enabled the use of tables and frequency distribution to present data. In drawing conclusions, it became clear that there were problems hindering job creation and employment in the Municipality. The main problem was the lack of employable skills on the part of the job seeker and inadequate entrepreneurial skills to create new jobs or expand already existing jobs. To address the problems identified, recommendations were made to the Municipal officials, institutions of learning (FET colleges and universities) and to job seekers/students as well