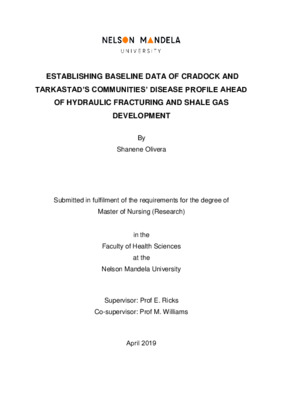 The South African government is investigating alternative ways to address the electricity crisis and has identified fracking as an alternative energy source. Specific areas have been identified for the implementation of Shale Gas Development. Various research studies have connected fracking to the incidence of certain diseases. Since Cradock and Tarkastad have been identified as prospective areas for the implementation of fracking, the primary aim of this study was to determine the disease profile of the community members in Cradock and Tarkastad. This baseline data could be utilised at a later stage as a benchmark when similar studies are conducted after the implementation of Shale Gas Development in these communities. A quantitative approach utilising a comparative descriptive survey design was adopted to conduct this study. The research population comprised all community members in Cradock and Tarkastad. A multi-staged sampling process was applied namely, cluster, convenient and stratified random sampling process; 489 respondents were included in the research sample. Two structured questionnaires and checklists were developed and administered by Registered Nurses, who were recruited as fieldworkers, to collect the data for the study. One questionnaire and checklist were designed and used for the age groups five-year and under population (n=43), and the other questionnaire and checklist were used for the over five-year population group (n=446). This allowed for the establishment of a disease profile of all ages in both areas. Descriptive and inferential statistics were used to analyse the data, and a pilot study was conducted before the primary study. The results of the study revealed the current disease profile in Tarkastad and Cradock. One of the objectives of the study was to compare the prevalence of diseases and abnormalities found in Cradock and Tarkastad. Thereafter the disease profiles were combined in a single profile for both Cradock and Tarkastad. Statistical analysis among the five-year-old and under population group indicated significant associations between area and physiological status, birthweight and physical conditions identified and monthly household income and physiological status (p<0.05). The over five-year-old population group revealed a greater significance between the independent and dependent variable categories than in the age group five years and under. The study revealed that South Africa’s burden of disease is evident in these findings with HIV/AIDS topping the list. The prevalence rates of HIV/AIDS and Hypertention are higher than the national prevalence rates, in Cradock and Tarkastad. It was also worthwhile to mention that Tarkastad faces more socio-economic challenges compared to Cradock. Recommendations were made for nursing practice, nursing education and further development of nursing research based on the research findings