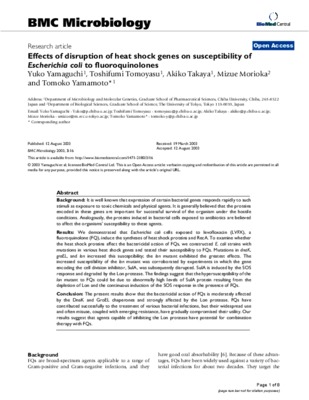 BACKGROUND: It is well known that expression of certain bacterial genes responds rapidly to such stimuli as exposure to toxic chemicals and physical agents. It is generally believed that the proteins encoded in these genes are important for successful survival of the organism under the hostile conditions. Analogously, the proteins induced in bacterial cells exposed to antibiotics are believed to affect the organisms' susceptibility to these agents. RESULTS: We demonstrated that Escherichia coli cells exposed to levofloxacin (LVFX), a fluoroquinolone (FQ), induce the syntheses of heat shock proteins and RecA. To examine whether the heat shock proteins affect the bactericidal action of FQs, we constructed E. coli strains with mutations in various heat shock genes and tested their susceptibility to FQs. Mutations in dnaK, groEL, and lon increased this susceptibility; the lon mutant exhibited the greatest effects. The increased susceptibility of the lon mutant was corroborated by experiments in which the gene encoding the cell division inhibitor, SulA, was subsequently disrupted. SulA is induced by the SOS response and degraded by the Lon protease. The findings suggest that the hypersusceptibility of the lon mutant to FQs could be due to abnormally high levels of SulA protein resulting from the depletion of Lon and the continuous induction of the SOS response in the presence of FQs. CONCLUSION: The present results show that the bactericidal action of FQs is moderately affected by the DnaK and GroEL chaperones and strongly affected by the Lon protease. FQs have contributed successfully to the treatment of various bacterial infections, but their widespread use and often misuse, coupled with emerging resistance, have gradually compromised their utility. Our results suggest that agents capable of inhibiting the Lon protease have potential for combination therapy with FQs