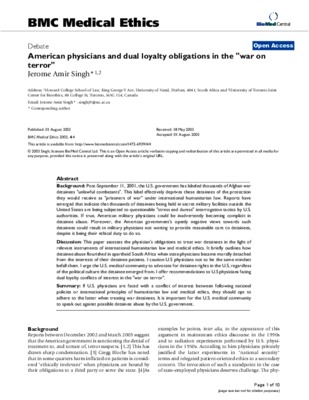 American physicians and dual loyalty obligations in the "war on terror"

BACKGROUND: Post-September 11, 2001, the U.S. government has labeled thousands of Afghan war detainees "unlawful combatants". This label effectively deprives these detainees of the protection they would receive as "prisoners of war" under international humanitarian law. Reports have emerged that indicate that thousands of detainees being held in secret military facilities outside the United States are being subjected to questionable "stress and duress" interrogation tactics by U.S. authorities. If true, American military physicians could be inadvertently becoming complicit in detainee abuse. Moreover, the American government's openly negative views towards such detainees could result in military physicians not wanting to provide reasonable care to detainees, despite it being their ethical duty to do so. DISCUSSION: This paper assesses the physician's obligations to treat war detainees in the light of relevant instruments of international humanitarian law and medical ethics. It briefly outlines how detainee abuse flourished in apartheid South Africa when state physicians became morally detached from the interests of their detainee patients. I caution U.S physicians not to let the same mindset befall them. I urge the U.S. medical community to advocate for detainee rights in the U.S, regardless of the political culture the detainee emerged from. I offer recommendations to U.S physicians facing dual loyalty conflicts of interest in the "war on terror". SUMMARY: If U.S. physicians are faced with a conflict of interest between following national policies or international principles of humanitarian law and medical ethics, they should opt to adhere to the latter when treating war detainees. It is important for the U.S. medical community to speak out against possible detainee abuse by the U.S. government