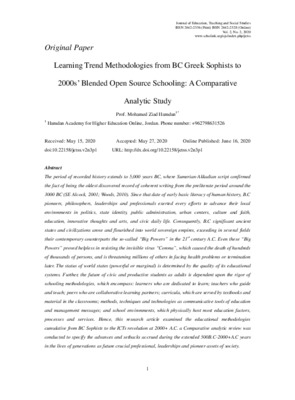 The period of recorded history extends to 5,000 years BC, where Sumerian-Akkadian script confirmed the fact of being the oldest discovered record of coherent writing from the preliterate period around the 3000 BC (SE Alcock, 2001; Woods, 2010). Since that date of early basic literacy of human history, B.C pioneers, philosophers, leaderships and professionals exerted every efforts to advance their local environments in politics, state identity, public administration, urban centers, culture and faith, education, innovative thoughts and arts, and civic daily life. Consequently, B.C significant ancient states and civilizations arose and flourished into world sovereign empires, exceeding in several fields their contemporary counterparts the so-called “Big Powers” in the 21st century A.C. Even these “Big Powers” proved helpless in resisting the invisible virus “Corona”, which caused the death of hundreds of thousands of persons, and is threatening millions of others in facing health problems or termination later. The status of world states (powerful or marginal) is determined by the quality of its educational systems. Further, the future of civic and productive students as adults is dependent upon the rigor of schooling methodologies, which encompass: learners who are dedicated to learn; teachers who guide and teach; peers who are collaborative learning partners; curricula, which are served by textbooks and material in the classrooms; methods, techniques and technologies as communicative tools of education and management messages; and school environments, which physically host most education factors, processes and services. Hence, this research article examined the educational methodologies cumulative from BC Sophists to the ICTs revolution at 2000+ A.C. a Comparative analytic review was conducted to specify the advances and setbacks accrued during the extended 500B.C-2000+A.C years in the lives of generations as future crucial professional, leaderships and pioneer assets of society