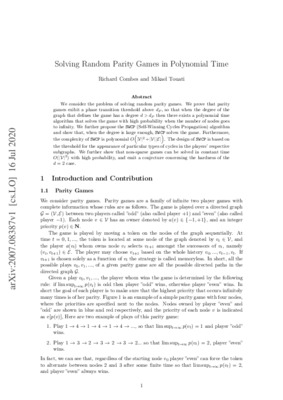 By Richard Combes and Mikael Touati
Get PDF (1 MB)

We consider the problem of solving random parity games. We prove that parity games exibit a phase transition threshold above $d_P$, so that when the degree of the graph that defines the game has a degree $d > d_P$ then there exists a polynomial time algorithm that solves the game with high probability when the number of nodes goes to infinity. We further propose the SWCP (Self-Winning Cycles Propagation) algorithm and show that, when the degree is large enough, SWCP solves the game with high probability. Furthermore, the complexity of SWCP is polynomial $O\Big(|{\cal V}|^2 + |{\cal V}||{\cal E}|\Big)$. The design of SWCP is based on the threshold for the appearance of particular types of cycles in the players' respective subgraphs. We further show that non-sparse games can be solved in time $O(|{\cal V}|)$ with high probability, and emit a conjecture concerning the hardness of the $d=2$ case.Comment: 23 page