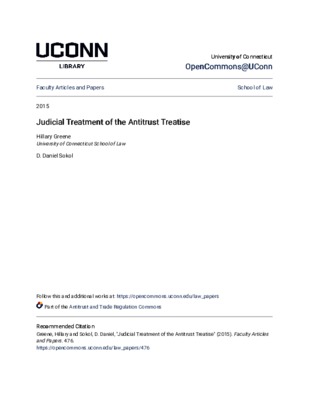 Judicial Treatment of the Antitrust Treatise

By Hillary Greene and D. Daniel Sokol
Get PDF (2 MB)

Herbert Hovenkamp has had a tremendous impact in antitrust scholarship. With over 4000 citations in the WestlawJLR database (most of which are for his antitrust scholarship), Hovenkamp is one of the most cited scholars in legal academia and has been recognized by the legal academy and the bar for his contribution to antitrust.\u27 Hovenkamp\u27s total citations are in part a function of his academic outputs; with 12 books (including monographs, edited books, and case books), plus the two-volume treatise on IP and Antitrust and the 2 i-volume Antitrust Law: An Analysis of Antitrust Principles and Their Application ( Treatise ), Hovenkamp could fill multiple shelves of most libraries. He has also published over 200 book chapters, articles, and book reviews. Hovenkamp\u27s scholarship has not only shaped academic discourse but also that of the courts. Justice Breyer once remarked that litigants would prefer to have two paragraphs of [the Areeda-Hovenkamp] treatise on their side than three Courts of Appeals or four Supreme Court Justices. One review of Hovenkamp\u27s work explains, Hovenkamp speaks with oracle-like authority on antitrust matters