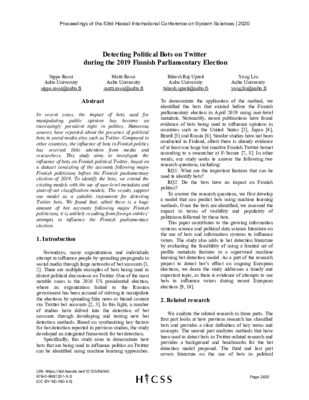 Detecting Political Bots on Twitter during the 2019 Finnish Parliamentary Election

In recent years, the political discussion has been dominated by the impact of bots used for manipulating public opinion. A number of sources have reported a widespread presence of political bots in social media sites such as Twitter. Compared to other countries, the influence of bots in Finnish politics have received little attention from media and researchers. This study aims to investigate the influence of bots on Finnish political Twitter, based on a dataset consisting of the accounts following major Finnish politicians before the Finnish parliamentary election of 2019. To identify the bots, we extend the existing models with the use of user-level metadata and state-of-art classification models. The results support our model as a suitable instrument for detecting Twitter bots. We found that, albeit there is a huge amount of bot accounts following major Finnish politicians, it is unlikely resulting from foreign entities’ attempt to influence the Finnish parliamentary election