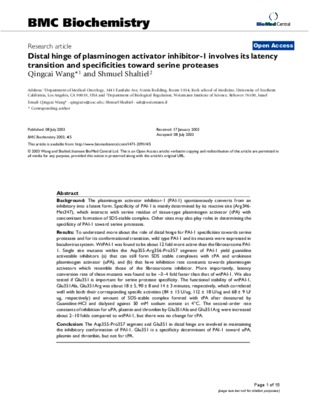 By Qingcai Wang and Shmuel Shaltiel
Get PDF (772 KB)

BACKGROUND: The plasminogen activator inhibitor-1 (PAI-1) spontaneously converts from an inhibitory into a latent form. Specificity of PAI-1 is mainly determined by its reactive site (Arg346-Met347), which interacts with serine residue of tissue-type plasminogen activator (tPA) with concomitant formation of SDS-stable complex. Other sites may also play roles in determining the specificity of PAI-1 toward serine proteases. RESULTS: To understand more about the role of distal hinge for PAI-1 specificities towards serine proteases and for its conformational transition, wild type PAI-1 and its mutants were expressed in baculovirus system. WtPAI-1 was found to be about 12 fold more active than the fibrosarcoma PAI-1. Single site mutants within the Asp355-Arg356-Pro357 segment of PAI-1 yield guanidine activatable inhibitors (a) that can still form SDS stable complexes with tPA and urokinase plasminogen activator (uPA), and (b) that have inhibition rate constants towards plasminogen activators which resemble those of the fibrosarcoma inhibitor. More importantly, latency conversion rate of these mutants was found to be ~3–4 fold faster than that of wtPAI-1. We also tested if Glu351 is important for serine protease specificity. The functional stability of wtPAI-1, Glu351Ala, Glu351Arg was about 18 ± 5, 90 ± 8 and 14 ± 3 minutes, respectively, which correlated well with both their corresponding specific activities (84 ± 15 U/ug, 112 ± 18 U/ug and 68 ± 9 U/ug, respectively) and amount of SDS-stable complex formed with tPA after denatured by Guanidine-HCl and dialyzed against 50 mM sodium acetate at 4°C. The second-order rate constants of inhibition for uPA, plasmin and thrombin by Glu351Ala and Glu351Arg were increased about 2–10 folds compared to wtPAI-1, but there was no change for tPA. CONCLUSION: The Asp355-Pro357 segment and Glu351 in distal hinge are involved in maintaining the inhibitory conformation of PAI-1. Glu351 is a specificity determinant of PAI-1 toward uPA, plasmin and thrombin, but not for tPA