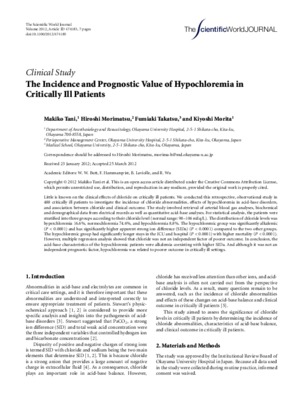 The Incidence and Prognostic Value of Hypochloremia in Critically Ill Patients

Little is known on the clinical effects of chloride on critically ill patients. We conducted this retrospective, observational study in 488 critically ill patients to investigate the incidence of chloride abnormalities, effects of hypochloremia in acid-base disorders, and association between chloride and clinical outcome. The study involved retrieval of arterial blood gas analyses, biochemical and demographical data from electrical records as well as quantitative acid-base analyses. For statistical analysis, the patients were stratified into three groups according to their chloride level (normal range: 98-106 mEq/L). The distribution of chloride levels was hyperchloremia 16.6%, normochloremia 74.6%, and hypochloremia 8.8%. The hypochloremic group was significantly alkalemic (P < 0.0001) and has significantly higher apparent strong ion difference (SIDa) (P < 0.0001) compared to the two other groups. The hypochloremic group had significantly longer stays in the ICU and hospital (P < 0.0001) with higher mortality (P < 0.0001). However, multiple regression analysis showed that chloride was not an independent factor of poorer outcome. In conclusion, the acid-base characteristics of the hypochloremic patients were alkalemia coexisting with higher SIDa. And although it was not an independent prognostic factor, hypochloremia was related to poorer outcome in critically ill settings