The determination of food authenticity and the detection of adulteration are major issues in the food industries, and are of concern among consumers.In some countries,the food manufacturers choose to blend vegetable oil with lard to reduce production cost because lard is the cheapest fat commonly available for food industries. Pork and lard are serious matters in view of some religions, biological complications and health risks associated with daily intake.Therefore,a rigorous method is urgently needed in order to detect the presence of lard in food.Fourier Transform Infrared (FTIR) spectroscopy has been widely used in many food authentication studies such as in coffee,extra virgin olive oil, jam, and fruit purees.It is a rapid analytical technique that measures the vibrations of bonds within their functional groups.In this study,rapid methods using FTIR techniques were developed to detect and quantify the level of lard adulteration in selected food model systems.In the first study, FTIR spectroscopy in combination with attenuated total reflectance(ATR) and Partial Least Square (PLS) regression was used to detect the presence of lard in chocolate formulation.A semi quantitative approach is proposed to measure the percent of lard in blends on the basis of spectral data at frequency region 4000-650cm-1.A high correlation of R2=0.9872 was obtained with a standard error (SE) of 1.305.In this second study, detection of lard in cake formulation was conducted. The lard was added to the shortening in the cake recipe at 0-100% level.FTIR spectra were recorded using ATR cell. A chemometric PLS regression was used to derive FTIR spectroscopic calibration model in regions of 1117-1097cm-1 and 990-950cm-1.For full cross validation, the R2 obtained was 0.9937 with standard error (SE) of 2.257.The result was compared to a test set validation; which gave slightly lower R2 value but better SE value(SE= 1.752).In the third study, the same FTIR technique was used to detect the presence of lard in biscuits.A linear plot (R2=0.9974) was obtained with SEC of 2.819 using calibration model,developed using region 3500-2900cm-1, 1780-1700cm-1, and 1500-800cm-1.The high correlation obtained indicated a good accuracy,reflecting a close relationship between actual and FTIR predicted value.From these studies, the potential of FTIR spectroscopy as a rapid analytical tool for the quantitative determination of lard in selected food model systems were demonstrated. The finding from this study will serve as a basis in developing a database for monitoring food authentication, especially for Halal authentication purposes 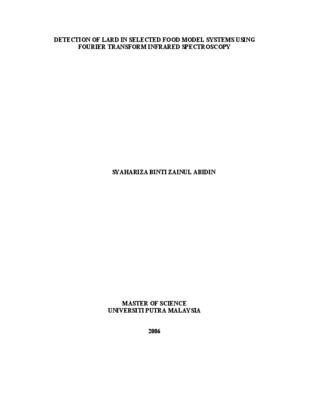 This paper was published in Universiti Putra Malaysia Institutional Repository.