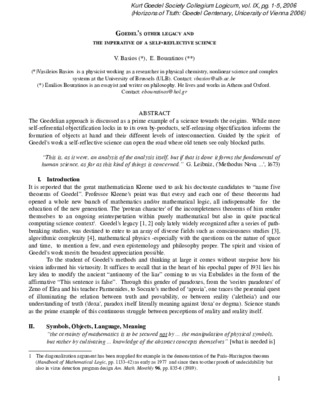 Goedel's Other Legacy And The Imperative Of A Self­reflective Science

By Vasileios Basios
Get PDF (64 KB)

The Goedelian approach is discussed as a prime example of a science towards the origins. While mere self­referential objectification locks in to its own by­products, self­releasing objectification informs the formation of objects at hand and their different levels of interconnection. Guided by the spirit of Goedel's work a self­reflective science can open the road where old tenets see only blocked paths. “This is, as it were, an analysis of the analysis itself, but if that is done it forms the fundamental of human science, as far as this kind of things is concerned.” G. Leibniz, ('Methodus Nova ...', 1673