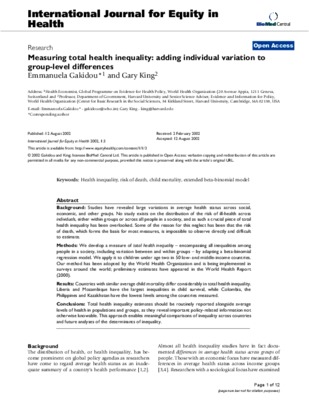 By Emmanuela Gakidou and Gary King
Get PDF (329 KB)

BACKGROUND: Studies have revealed large variations in average health status across social, economic, and other groups. No study exists on the distribution of the risk of ill-health across individuals, either within groups or across all people in a society, and as such a crucial piece of total health inequality has been overlooked. Some of the reason for this neglect has been that the risk of death, which forms the basis for most measures, is impossible to observe directly and difficult to estimate. METHODS: We develop a measure of total health inequality – encompassing all inequalities among people in a society, including variation between and within groups – by adapting a beta-binomial regression model. We apply it to children under age two in 50 low- and middle-income countries. Our method has been adopted by the World Health Organization and is being implemented in surveys around the world; preliminary estimates have appeared in the World Health Report (2000). RESULTS: Countries with similar average child mortality differ considerably in total health inequality. Liberia and Mozambique have the largest inequalities in child survival, while Colombia, the Philippines and Kazakhstan have the lowest levels among the countries measured. CONCLUSIONS: Total health inequality estimates should be routinely reported alongside average levels of health in populations and groups, as they reveal important policy-related information not otherwise knowable. This approach enables meaningful comparisons of inequality across countries and future analyses of the determinants of inequality