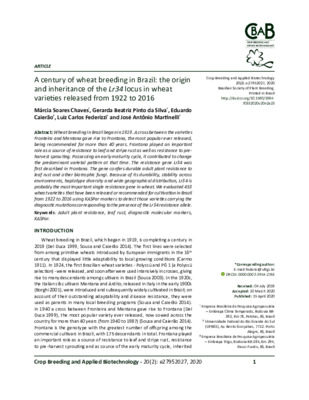 A century of wheat breeding in Brazil: the origin and inheritance of the Lr34 locus in wheat varieties released from 1922 to 2016.

Abstract: Wheat breeding in Brazil began in 1919. A cross between the varieties Fronteira and Mentana gave rise to Frontana, the most popular ever released, being recommended for more than 40 years. Frontana played an important role as a source of resistance to leaf and stripe rust as well as resistance to preharvest sprouting. Possessing an early maturity cycle, it contributed to change the predominant varietal pattern at that time. The resistance gene Lr34 was first described in Frontana. The gene confers durable adult plant resistance to leaf rust and other biotrophic fungi. Because of its durability, stability across environments, haplotype diversity and wide geographical distribution, Lr34 is probably the most important single resistance gene in wheat. We evaluated 453 wheat varieties that have been released or recommended for cultivation in Brazil from 1922 to 2016 using KASPar markers to detect those varieties carrying the diagnostic mutations corresponding to the presence of the Lr34 resistance allele.bitstream/item/212713/1/Artigo-A-century-of-wheat-breeding-in-Brazil.pd