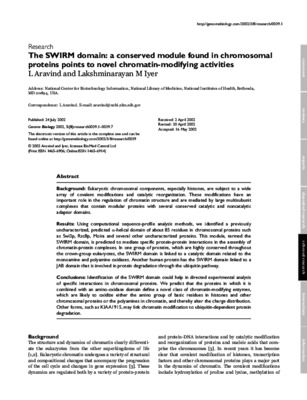 By L Aravind and Lakshminarayan M Iyer
Get PDF (124 KB)

BACKGROUND: Eukaryotic chromosomal components, especially histones, are subject to a wide array of covalent modifications and catalytic reorganization. These modifications have an important role in the regulation of chromatin structure and are mediated by large multisubunit complexes that contain modular proteins with several conserved catalytic and noncatalytic adaptor domains. RESULTS: Using computational sequence-profile analysis methods, we identified a previously uncharacterized, predicted α-helical domain of about 85 residues in chromosomal proteins such as Swi3p, Rsc8p, Moira and several other uncharacterized proteins. This module, termed the SWIRM domain, is predicted to mediate specific protein-protein interactions in the assembly of chromatin-protein complexes. In one group of proteins, which are highly conserved throughout the crown-group eukaryotes, the SWIRM domain is linked to a catalytic domain related to the monoamine and polyamine oxidases. Another human protein has the SWIRM domain linked to a JAB domain that is involved in protein degradation through the ubiquitin pathway. CONCLUSIONS: Identification of the SWIRM domain could help in directed experimental analysis of specific interactions in chromosomal proteins. We predict that the proteins in which it is combined with an amino-oxidase domain define a novel class of chromatin-modifying enzymes, which are likely to oxidize either the amino group of basic residues in histones and other chromosomal proteins or the polyamines in chromatin, and thereby alter the charge distribution. Other forms, such as KIAA1915, may link chromatin modification to ubiquitin-dependent protein degradation