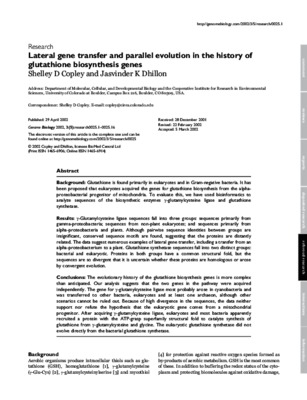 BACKGROUND: Glutathione is found primarily in eukaryotes and in Gram-negative bacteria. It has been proposed that eukaryotes acquired the genes for glutathione biosynthesis from the alpha-proteobacterial progenitor of mitochondria. To evaluate this, we have used bioinformatics to analyze sequences of the biosynthetic enzymes γ-glutamylcysteine ligase and glutathione synthetase. RESULTS: γ-Glutamylcysteine ligase sequences fall into three groups: sequences primarily from gamma-proteobacteria; sequences from non-plant eukaryotes; and sequences primarily from alpha-proteobacteria and plants. Although pairwise sequence identities between groups are insignificant, conserved sequence motifs are found, suggesting that the proteins are distantly related. The data suggest numerous examples of lateral gene transfer, including a transfer from an alpha-proteobacterium to a plant. Glutathione synthetase sequences fall into two distinct groups: bacterial and eukaryotic. Proteins in both groups have a common structural fold, but the sequences are so divergent that it is uncertain whether these proteins are homologous or arose by convergent evolution. CONCLUSIONS: The evolutionary history of the glutathione biosynthesis genes is more complex than anticipated. Our analysis suggests that the two genes in the pathway were acquired independently. The gene for γ-glutamylcysteine ligase most probably arose in cyanobacteria and was transferred to other bacteria, eukaryotes and at least one archaeon, although other scenarios cannot be ruled out. Because of high divergence in the sequences, the data neither support nor refute the hypothesis that the eukaryotic gene comes from a mitochondrial progenitor. After acquiring γ-glutamylcysteine ligase, eukaryotes and most bacteria apparently recruited a protein with the ATP-grasp superfamily structural fold to catalyze synthesis of glutathione from γ-glutamylcysteine and glycine. The eukaryotic glutathione synthetase did not evolve directly from the bacterial glutathione synthetase