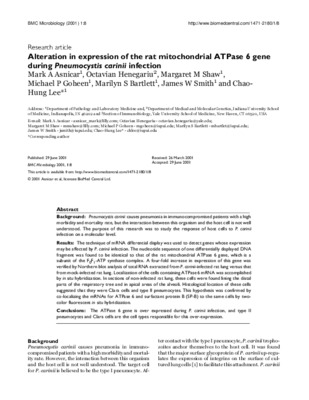 BACKGROUND: Pneumocystis carinii causes pneumonia in immunocompromised patients with a high morbidity and mortality rate, but the interaction between this organism and the host cell is not well understood. The purpose of this research was to study the response of host cells to P. carinii infection on a molecular level. RESULTS: The technique of mRNA differential display was used to detect genes whose expression may be affected by P. carinii infection. The nucleotide sequence of one differentially displayed DNA fragment was found to be identical to that of the rat mitochondrial ATPase 6 gene, which is a subunit of the F(0)F(1)-ATP synthase complex. A four-fold increase in expression of this gene was verified by Northern blot analysis of total RNA extracted from P. carinii-infected rat lung versus that from mock-infected rat lung. Localization of the cells containing ATPase 6 mRNA was accomplished by in situ hybridization. In sections of non-infected rat lung, these cells were found lining the distal parts of the respiratory tree and in apical areas of the alveoli. Histological location of these cells suggested that they were Clara cells and type II pneumocytes. This hypothesis was confirmed by co-localizing the mRNAs for ATPase 6 and surfactant protein B (SP-B) to the same cells by two-color fluorescent in situ hybridization. CONCLUSIONS: The ATPase 6 gene is over expressed during P. carinii infection, and type II pneumocytes and Clara cells are the cell types responsible for this over-expression