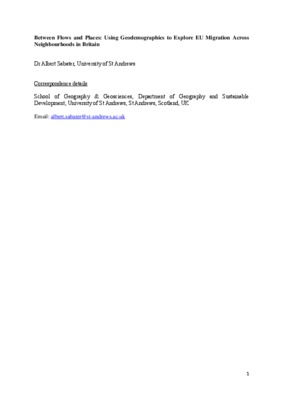 Between Flows and Places : Using Geodemographics to Explore EU Migration Across Neighbourhoods in Britain

By Albert Sabater
Get PDF (1 MB)

During the past decade, the growing significance of EU migrants in Britain has attracted considerable media and policy attention. While the rhetoric and public policy debate has focused on national and regional levels, surprisingly, little is known about the emerging settlement patterns of EU migrants at the local level. This paper sheds some light on this important issue by exploring the socio-spatial characteristics of the places of destination/residence of EU migrants and, in doing so, reveals the extent to which the concentration-dispersal framework applies to their settlement pattern. To evaluate whether and in what ways EU migrants have settled across neighbourhoods in Britain, 2001 and 2011 census estimates as well as geodemographic data are used. The findings suggest that EU migrants have consolidated their national presence in Britain because of their growing numbers and unprecedented geographical dispersal. While EU migrants’ settlement does not seem to translate into strong clustering patterns, diverging socio-spatial experiences are found among the largest groups (Polish, Italian, Portuguese and Spanish).PostprintPeer reviewe