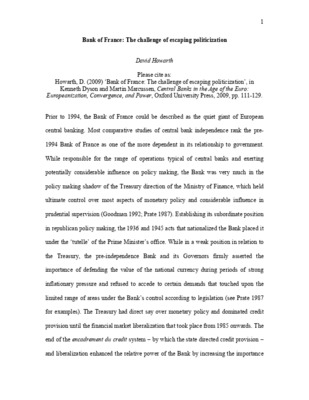 Bank of France: The challenge of escaping politicization

This contribution will show that Europeanization since 1993—the independence of the Bank of France in 1994 and the transfer of monetary policy powers to the European Central Bank (ECB) in 1999—had a clear and direct impact on the power and roles of the Governor and the members of the Conseil de la Politique Monétaire (MPC), but a less obvious impact on the organisation and responsibilities of the Bank itself. Independence and the 1999 transfer have also had a direct impact upon the Bank’s role in public life. Well over a decade since independence, monetary policy remains more politicized in France than in most Eurosystem member states, thus bucking the trend of a politicisation. In terms of the Bank’s core operations, however, political hostility has created only marginal difficulties