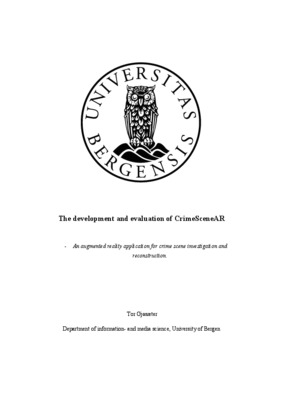 The development and evaluation of CrimeSceneAR - An augmented reality application for crime scene investigation and reconstruction.

In a murder case, the key evidence is normally the corpse, which obviously, is removed from the crime scene as soon as possible. This removal can cause difficulties for the investigators, as the corpse is a crucial part of the investigation. To improve this situation, CrimeSceneAR was proposed and developed - an augmented reality prototype - which recreates vital evidence and superimposes it directly at the crime scene. How CrimeSceneAR can contribute to solving this issue in crime scene investigation (CSI), as well contributing to crime scene reconstruction (CSR) in court cases has been the focus of this study. The prototype was evaluated using usability inspection methods and think aloud analysis captured by several video cameras. The findings from the evaluations suggest that CrimeSceneAR contributes to CSI and CSR. The visualizations provided by CrimeSceneAR seem to be superior to those currently employed today (photographs) in CSI and CSR. In addition, some usability issues and problems regarding the usage of CrimeSceneAR in CSI and CSR were uncovered