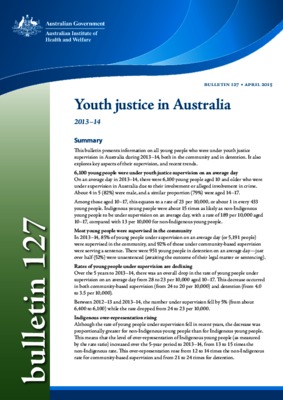 By Australian Institute of Health and Welfare
Get PDF (1 MB)

Presents information on all young people who were under youth justice supervision in Australia during 2013–14, both in the community and in detention. It also explores key aspects of their supervision, and recent trends. Introduction The youth justice system is the set of processes and practices for managing children and young people who have committed, or allegedly committed, an offence. While each state and territory in Australia has its own youth justice legislation, policies and practices, the general processes by which young people are charged and sentenced, and the types of legal orders available to the courts, are similar. Separate justice systems exist for young people and adults. Young people can be charged with a criminal offence if they are aged 10 and older. The upper age limit for treatment as a young person is 17 in all states and territories except Queensland, where the limit is 16. However, some young people aged 18 and older are also involved in the youth justice system. This may be due to the offence being committed when the young person was aged 17 or younger; the continuation of supervision once they turn 18; or their vulnerability or immaturity. Also, in Victoria, some young people aged 18–20 may be sentenced to detention in a youth facility under a ‘dual track’ sentencing system, which is intended to prevent vulnerable young people from entering the adult prison system at an early age. &nbsp; A young person first enters the youth justice system when they are investigated by police for allegedly committing a crime. Legal action taken by police may include court actions (the laying of charges to be answered in court) and non-court actions (such as cautions, conferencing, counselling or infringement notices). A court may decide to dismiss the charge, divert the young person from further involvement in the system (for example by referral to mainstream services), or transfer them to specialist courts or programs. If the matter proceeds and the charge is proven, the court may hand down any of a number of orders, either supervised or unsupervised. &nbsp