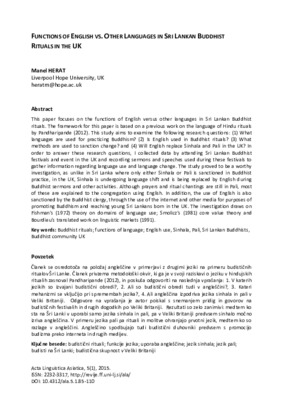 Functions of English vs other languages in Sri Lankan Buddhist Rituals

This paper focuses on the functions of English versus other languages in Sri Lankan Buddhist rituals. The framework for this paper is based on a previous work on the language of Hindu rituals by Pandharipande (2012). This study aims to examine the following research questions: (1) What languages are used for practicing Buddhism? (2) Is English used in Buddhist rituals? (3) What methods are used to sanction change? and (4) Will English replace Sinhala and Pali in the UK? In order to answer these research questions, I collected data by attending Sri Lankan Buddhist festivals and event in the UK and recording sermons and speeches used during these festivals to gather information regarding language use and language change. The study proved to be a worthy investigation, as unlike in Sri Lanka where only either Sinhala or Pali is sanctioned in Buddhist practice, in the UK, Sinhala is undergoing language shift and is being replaced by English during Buddhist sermons and other activities. Although prayers and ritual chantings are still in Pali, most of these are explained to the congregation using English. In addition, the use of English is also sanctioned by the Buddhist clergy, through the use of the internet and other media for purposes of promoting Buddhism and reaching young Sri Lankans born in the UK. The investigation draws on Fishman’s (1972) theory on domains of language use; Smolicz’s (1981) core value theory and Bourdieu’s translated work on linguistic markets (1991)