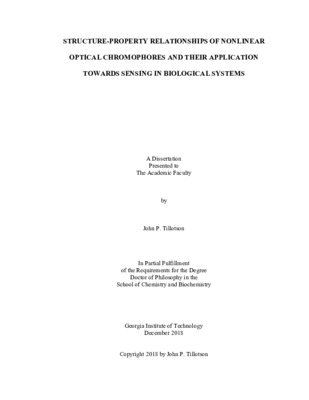 This dissertation investigates the use of nonlinear optical chromophores, typically with strong second-order nonlinearities, for sensing applications in biological systems. The two main areas of focus, in terms of biological sensing, are the two-photon excited fluorescent sensing of metal ions in biological environments and the sensing of transmembrane potentials, such as an action potential in a neuron. The metal ion sensing work can be broken down into two major approaches. First, a calcium ion sensitive dye with a donor-π-donor-binding domain architecture was synthesized in excellent yield by sequential Horner-Wadsworth-Emmons reactions. This chromophore, BAPTA-bisstyrylbenzene (BAPTA-BSB), shows a strong two-photon absorbance (2PA) cross-section of about 400 GM. The second major phase of the metal ion sensing work is the investigation of the effects of surface charge on the sensing efficacy of chromophore with a donor-π-acceptor-binding domain architecture, which is sensitive to zinc ions. This chromophore, called SL-35, was synthesized by Dr. Sumalekshmy in Professor Christoph Fahrni’s research group. The architecture of SL-35 was purposefully designed, such that the binding of the zinc ion increases the acceptor strength of the acceptor, resulting in an increase in the charge transfer and the 2PA cross-section. This increase in acceptor strength also results in redshifted absorbance and fluorescence spectra, allowing for ratiometric sensing. The sensitivity of SL-35 was assessed in micelles of varying surface charge: cetyltrimethylammonium bromide (CTAB) – positive, Triton-X – neutral, and sodium dodecylsulfate (SDS) – negative. Zn(II) titrations of SL-35 encapsulated in micelles of the three surfactants listed above, demonstrate the surface charge affects the sensing efficacy of the chromophore. In SDS micelles, the negative charge of the micelle acts to increase the sensitivity of SL-35 toward Zn(II) ions, while CTAB micelles diminish its sensitivity. The observed results can be explained by the electrostatic interactions between the micelles and the zinc cations. The CTAB micelles repel the similarly charged metal ions, while the SDS micelles attract the oppositely charged ions. The investigation of neural circuitry has become a very important to the medical field over the last few decades. The action potential was first described as a rapid reorganization of ions across a neuronal membrane in 1945. Though the phenomenon has been measured and described, the understanding of the communications between neurons in a network is lacking. Our approach to this problem is based on second harmonic generation (SHG) imaging. SHG is well suited to sensing transmembrane potentials because it offers the distinct advantage of being sensitive to an external electric field. The maximization of SHG sensitivity is investigated by two main approaches. First, the use of cyanine dyes seems counterintuitive for SHG applications as they have minimal second order nonlinearities. That said, the maximal change in SHG signal in response to an electric field occurs where the signal is at its smallest. Second, the scaling behavior of the ratio of the third-order () to the second-order (β) nonlinearities increases with the length of a strongly dipolar chromophore. The SHG sensitivity is directly proportional to the ratio of /β. A series of strong merocyanines of varying length and acceptor strength were used to investigate this scaling behavior. The SHG sensitivity of both sets of chromophores was estimated by three methods. First the static nonlinearities were used to investigate the completely electrooptic components of SHG based on the ratio of /β. Second, the field-dependent second-order nonlinearities were used to estimate the SHG sensitivity. The field was changed by varying the solvent, evoking the Onsager reaction field. These fields changes are significantly larger that of an action potential. Finally, the SHG sensitivity was estimated by measuring the change in response of target chromophores encapsulated in phosphatidyl choline vesicles. The potential was created by varying the potassium ion concentration inside and outside of the vesicles. The introduction of a potassium ions – specific ionophore allowed for the generation of a transmembrane potential. Through these methods, we see significant SHG sensitivities of more than a 25% change per 100 mV of field change in several of the merocyanines studied as well as an azaazulene-based cyanine. These results suggest that the optimization of SHG sensitivity can occur using both approaches taken.Ph.D