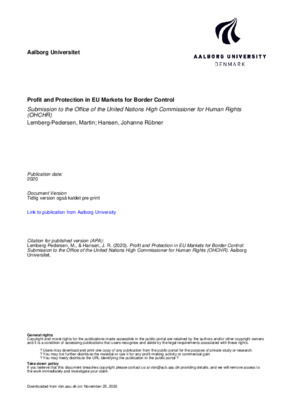 Profit and Protection in EU Markets for Border Control:Submission to the Office of the United Nations High Commissioner for Human Rights (OHCHR)

Through the cases of interoperable EU databases, like VIS, SIS and EES, and space-based, networked surveillance pursued under the EURUSOUR project, this report details the intensification and proliferation of public private interactions concerning European Union infrastructures of border control. It argues that this has accelerated a drive towards the securitization and militarization of European border control. Through a methodology involving the construction of several databases, and multi-sourced desk research into the actors, networks and instruments underpinning EU border control, the report links these tendenciesto the conjunction between EU institutions and private actors from the European security and defence sector. It examines the various lobbying strategies and forums effectuated by actors on the market for EU border control, and how it connects to industrial ambitions of widening and standardized of future markets. It argues thatthe blurring of public and private interests has transformed many aspects of EU border control into increasingly profitable sites for multisectoral marketinterventions. Much of this development has been engineered in specialized and closed forums, such as expert workshops, task forces, technical studies, pilots, or advisory groups and technological platforms steering not just policies, but also the formulation of research and development priorities of funding programmes, like the FP7 and Horizon2020.  Accordingly, the report identifies several R&amp;D projects and framework contracts pertaining to interoperable border databases and the EUROSUR project, which have been awarded a number of the same big security and defence companies in Europe. These actors, the report argues, are involved in EU border infrastructures on the levels of strategy, planning, advisory input and technical expertise, but also as product suppliers for the “end users”, that is the EU or national agencies and bodies tasked with border control. By comparison, voices stressing the need to safeguard the rights of those displaced are excluded from anywhere near the same access to formal and informal policy-making forums. The different levels on which vested interests affect policy-making on EU border control is further illustrated when considering the financial dynamics underpinning the conglomerate actors involved in border control, through shareholding, grants, loans and credits. It argues that the strategic and operational influence on border-making yielded by global finance is an understuded aspect of the militarization of EU borders, and suggests paths to remedy this. From within a framework of forward-looking and sustainable policy based on the respect of fundamental rights and democratic transparency, the report details how this development leads to technological and political lock-in effects. These make it diffulcult for policy-makers to question or reverse the functionality of the EU borders as well as the norms embedded within infrastructures such as the VIS, SIS, EES or EUROSUR systems. These dynamics pose serious challenges not just to the democratic legitimacy and transparency of the EU’s multileved governance of borders, but also to the balance struck between short-sighted, vested interests, and the respect for fundamental rights, including to privacy and protection