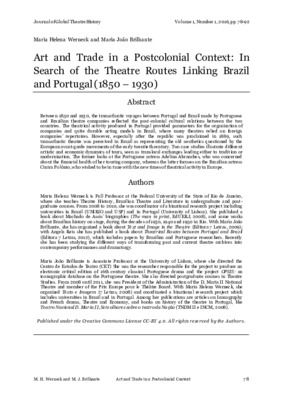 Art and Trade in a Postcolonial Context: In Search of the Theatre Routes Linking Brazil and Portugal, 1850 1930

Between 1850 and 1930, the transatlantic voyages between Portugal and Brazil made by Portuguese and Brazilian theatre companies reflected the post-colonial cultural relations between the two countries. The theatrical activity produced in Portugal provided parameters for the organization of companies and quite durable acting models in Brazil, where many theatres relied on foreign companies' repertoires. However, especially after the republic was proclaimed in 1889, such transatlantic theatre was perceived in Brazil as representing the old aesthetics questioned by the European avant-garde movements of the early twentieth century. Two case studies illustrate different artistic and economic dynamics of tours, seen as translocal exchanges leading either to tradition or modernization. The former looks at the Portuguese actress Adelina Abranches, who was concerned about the financial health of her touring company, whereas the latter focuses on the Brazilian actress Cinira Polônio, who wished to be in tune with the new times of theatrical activity in Europe