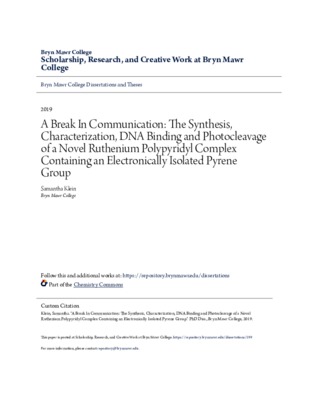 A Break In Communication: The Synthesis, Characterization, DNA Binding and Photocleavage of a Novel Ruthenium Polypyridyl Complex Containing an Electronically Isolated Pyrene Group

By Samantha Klein
Get PDF (3 MB)

A novel complex [Ru(bpy)2bpy-py]2+ (where bpy= 2,2’-bipyridine and bpy-py=N-(6-(4-(pyren-1-yl) butanamido) hexyl)-[2,2\u27-bipyridine]-5-carboxamide))) has been synthesized. The effect of electronically isolating the pyrene from the metal core on the complex’s ability to bind to and photocleave DNA was studied. Other molecules such as 1-pyreneacetic acid and [Ru(bpy)2dep]2+ (where dep= N-(6-aminohexyl)-[2,2\u27-bipyridine]-5-carboxamide), which share structural similarities to [Ru(bpy)2bpy-py]2+, were also studied to help determine which areas of the [Ru(bpy)2bpy-py]2+ molecule may be responsible for interacting with DNA. Spectroscopic experiments including isothermal and competitive binding titrations in addition to the hydrodynamic technique of viscometry were used to show that [Ru(bpy)2bpy-py]2+ binds to DNA with a binding constant of 8 x 105 and 1x106 M-1 (binding constants calculated using isothermal and competitive binding experiments, respectively). Agarose gel electrophoresis, used to assess photocleavage, gave ambiguous results. Additional fluorometric experiments revealed that a transfer of energy from the pyrene portion of the complex to the ruthenium core may be occurring