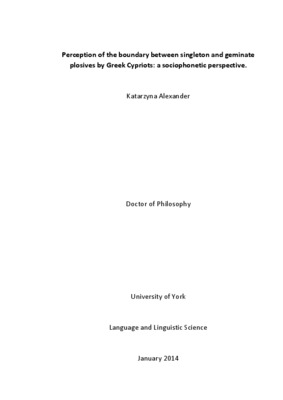 Perception of the boundary between singleton and geminate plosives by Greek Cypriots: a sociophonetic perspective

By Katarzyna Alexander
Get PDF (2 MB)

Standard Modern Greek (SMG) and Cypriot Greek (CG), two language varieties used by Greek Cypriots living in Cyprus, differ in their plosive inventories, as CG includes voiceless geminate plosives which are absent in SMG. Words containing geminate plosives may be divided into two groups; in one, replacing a geminate plosive with a singleton plosive changes the meaning of the word, whereas in the other group replacing a geminate with a singleton does not cause any change to the word’s literal meaning. Matched-guise technique (MGT) tests carried out as a part of this study suggest that substituting a singleton plosive [t] with a geminate [t:h] tends to alter the social characteristics attributed to the speaker uttering words containing the target sounds. Forced-choice perceptual tests were carried out with Greek Cypriot listeners in three conditions, (1) in the presence of the Greek flag (symbolising the Greek culture and/or region), (2) in the presence of the Cypriot flag (symbolising the Cypriot culture and/or region), and (3) in the absence of the two flags. The results indicate that the perception of the boundary between singleton and geminate plosives tends to be affected by several variables such as the length of the plosive embedded in the test stimuli, the presence of the flags, the gender of the listeners and the way listeners produced singleton and geminate plosives themselves. Socio-economic background and cultural affiliation of the listeners, which were assumed to be indicators of the amount of exposure to singleton plosives in the discussed context, were also among the variables affecting the perception of the boundary. The results of this study seem to add evidence to some of the assumptions of exemplar theory relating to the importance of amount of exposure to a sound category, the role of acoustic properties of stored exemplars, and processing of indexical information in speech perception. Also, the results of the study appear to suggest that factors such as listeners’ linguistic insecurity or listeners’ satisfaction with their social position might also have an effect on the way they process speech by increasing or decreasing their sensitivity to acoustic properties of sounds. It is suggested that the role of listeners’ linguistic insecurity and the role of their satisfaction with social position in increasing and decreasing sensitivity to phonetic cues should be further investigated in future research and possibly incorporated into models of speech perception