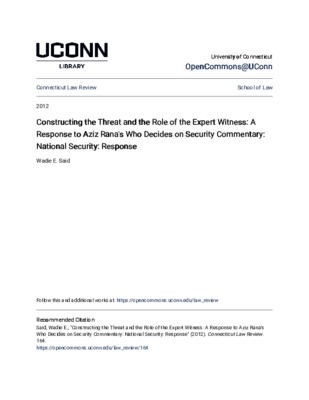 Constructing the Threat and the Role of the Expert Witness: A Response to Aziz Rana\u27s Who Decides on Security Commentary: National Security: Response

Aziz Rana\u27s article presents clearly the overlooked but crucial question of Who Decides on Security? Namely, is determining who or what groups constitute a threat something that we are capable of making ourselves, or must we necessarily cede that authority to those in power-who supposedly have both the access to knowledge and the ability to understand it-to protect us from threats we cannot perceive? Using Rana\u27s historical analysis as a framework, this Article builds on his thesis to show how the wide latitude granted to the conclusions of the Executive Branch\u27s national security specialists in political matters has migrated into the criminal justice system. This Article focuses on the specific example of expert witnesses in federal criminal terrorism prosecutions and demonstrates that courts have been overly deferential in allowing such individuals to testify as experts. As a result, courts admit too much expert testimony of questionable methodology and reliability against defendants charged with terrorist crimes. This Article provides several examples of the phenomenon of deference to the government\u27s experts, as well as a focused critique of the practice of using experts to win convictions in such cases