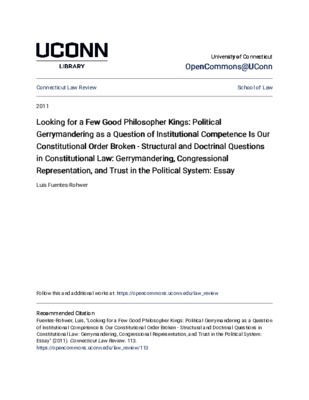 The redistricting season is about to begin in full swing, and with it will come renewed calls for the federal courts, particularly the U.S. Supreme Court, to aggressively review the work of the political branches. This is an intriguing puzzle. Since the early 1960s, the federal courts have regulated questions of politics aggressively. They have done this even in the face of difficult questions of political representation. The courts have taken sides, to be sure, but these can only be described as acts of volition and will, not constitutional law. The leading case was Reynolds v. Sims. This was when the Supreme Court ultimately divorced these political questions from the constitutional text. Reynolds informed all subsequent case law within the Law of Democracy. If the Court could decide Reynolds as it did, it could decide anything. But this is not true for political gerrymandering questions. What explains this hesitation on the part of the Justices? This Essay answers this important question. Understanding the Justices as strategic actors, this Essay conjectures that the Court removes itself as an institutional player in the gerrymandering debate because the redistricting process left alone tilts to conservative policies and outcomes. More generally, this Essay argues that scholarly calls for judicial intervention demand the existence of philosopher kings to choose amongst myriad theories of representation. These are calls, in effect, for an activist judicial role in an area that demands judicial deference. At the very least, this is an area that demands comparative institutional analysis. This is something we seldom see