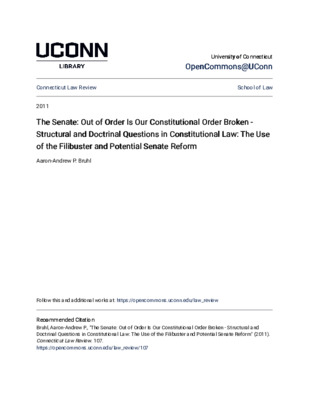 The Senate: Out of Order Is Our Constitutional Order Broken - Structural and Doctrinal Questions in Constitutional Law: The Use of the Filibuster and Potential Senate Reform

Due to the routine use of the filibuster and related devices, today’s Senate operates as a supermajoritarian body. This Symposium Article considers whether this supermajoritarian aspect of the Senate renders it dysfunctional and, if so, what can be done about it. I contend that the Senate is indeed broken. Its current supermajoritarian features have pernicious effects. Further, and contrary to the claims of many of the Senate’s defenders, this aspect of the Senate is not part of the original design. I go on to explain why the Senate’s procedures, despite their deficiencies, have nonetheless proven resistant to reform. The impediment to change is not based in law but instead derives largely from legislators’ incentives. I close by discussing whether and how those incentives could be altered