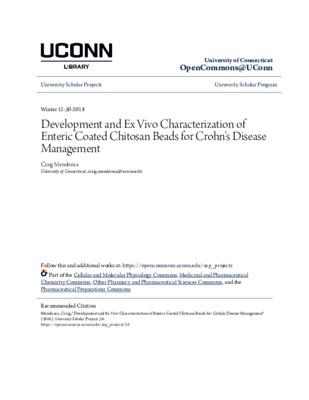 Drug delivery is the process of transporting a drug to its site of action. It includes controlled delivery, where the drug is released at the tissue in a regulated manner. Additionally, it includes targeted delivery, where the drug is aimed at a specific tissue or region to avoid unwanted side effects (that would occur if the drug were distributed throughout the body). A cellulose acetate phthalate coated chitosan bead was developed as a formulation for controlled and targeted release of dexamethasone to the ilium and colon. This formulation was determined to be effective in delaying dexamethasone release until the formulation had reached conditions that simulated the large intestine. Ex vivo characterization using an adapted Franz diffusion cell demonstrated that the formulation was able to limit the diffusion of the drug through the intestine, which may reduce unwanted side effects as result of the dexamethasone entering the systemic circulation