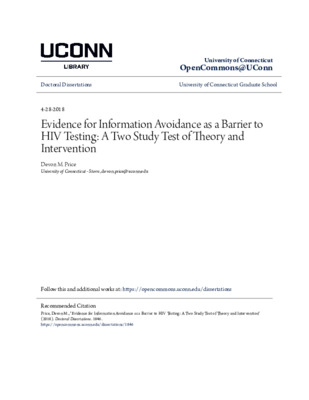 Evidence for Information Avoidance as a Barrier to HIV Testing: A Two Study Test of Theory and Intervention

Despite the United States being home to the most advanced HIV treatments, as well as substantial funding for outreach and testing efforts, new domestic HIV infections are still reaching epidemic proportions throughout the country. One proposed contributor to the epidemic is at-risk individuals not engaging in routine HIV testing and unintentionally spreading an undiagnosed infection to others. Although alleviating structural barriers remains crucial to increasing HIV testing among those at-risk for HIV, psychosocial barriers also perpetuate HIV testing disparities in the United States. The current study sought to both understand which psychosocial barriers predict engagement with HIV testing and to subsequently intervene on the major psychosocial barrier discovered in the first study. Study 1 tested several previously studied psychosocial barriers, and one novel predicted barrier, HIV status information avoidance in relation to the decision to engage in HIV testing with a mobile testing van. Results of Study 1 indicated that HIV status information avoidance was the only significant predictor of whether someone had engaged in HIV testing recently or not. The second study then sought to intervene on the underlying psychosocial barrier to HIV testing by testing two previously studied social psychological health behavior change interventions to reduce avoidance of testing and increase HIV testing engagement among at-risk men who have sex with men (MSM). Study 2 indicated that the two social psychological interventions employed to reduce avoidance of testing did not increase HIV testing numbers in an at-risk sample. Implications for these findings are discussed