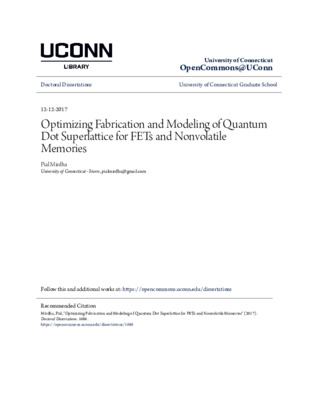 Quantum Dot Superlattice (QDSL) are novel structures which can be applied to transistors and memory devices to produce unique current voltage characteristics. QDSL are made of Silicon and Germanium with an inner intrinsic layer surrounded by their respective oxides and in the single digit nanometer range. When used in transistors they have shown to induce 3 to 4 states for Multi-Valued Logic (MVL). When applied to memory they have been demonstrated to retain 2 bits of charge which instantly double the memory density. For commercial application they must produce consistent and repeatable current voltage characteristics, the current QDSL structures consist of only two layers of quantum dots which is not a robust design. This thesis demonstrates the utility of using QDSL by designing MVL circuit which consume less power while still producing higher computational speed when compared to conventional cmos based circuits. Additionally, for reproducibility and stability of current voltage characteristics, a novel 4 layer of both single and mixed quantum dots are demonstrated. The stacking of QDSL of more than 2 layers allows greater charge storage whic can add lead to more distinct MVL and memory states. This QDSL structure is verified using AFM. Also demonstrated is the capability to assemble only one layer of QDSL. Finally a physics and surface potential based numerical model is developed which incorporates the QDSL structures charge storage. This is can be used to model transistors and memory for circuit application or for individual device physics analysis for optimization. The QDSL charge storage in modeled in a computationally less intensive way when compared to their derivation from quantum mechanics