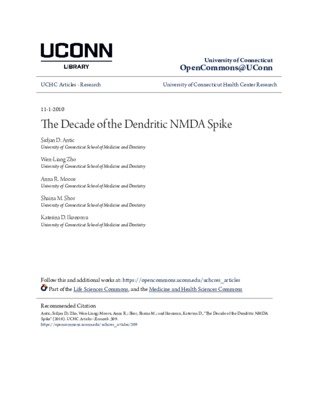 The Decade of the Dendritic NMDA Spike

In the field of cortical cellular physiology, much effort has been invested in understanding thick apical drites of pyramidal neurons and the regenerative sodium and calcium spikes that take place in the apical trunk. Here we focus on thin dendrites of pyramidal cells (basal, oblique, and tuft dendrites), and we discuss one relatively novel form of an electrical signal (“NMDA spike”) that is specific for these branches. Basal, oblique, and apical tuft dendrites receive a high density of glutamatergic synaptic contacts. Synchronous activation of 10–50 neighboring glutamatergic synapses triggers a local dendritic regenerative potential, NMDA spike/plateau, which is characterized by significant local amplitude (40–50 mV) and an extraordinary duration (up to several hundred milliseconds). The NMDA plateau potential, when it is initiated in an apical tuft dendrite, is able to maintain a good portion of that tuft in a sustained depolarized state. However, if NMDA-dominated plateau potentials originate in proximal segments of basal dendrites, they regularly bring the neuronal cell body into a sustained depolarized state, which resembles a cortical up state. At each dendritic initiation site (basal, oblique, and tuft) an NMDA spike creates favorable conditions for causal interactions of active synaptic inputs, including the spatial or temporal binding of information, as well as processes of short-term and long-term synaptic modifications (e.g., long-term potentiation or long-term depression). Because of their strong amplitudes and durations, local dendritic NMDA spikes make up the cellular substrate for multisite independent subunit computations that enrich the computational power and repertoire of cortical pyramidal cells. We propose that NMDA spikes are likely to play significant roles in cortical information processing in awake animals (spatiotemporal binding, working memory) and during slow-wave sleep (neuronal up states, consolidation of memories