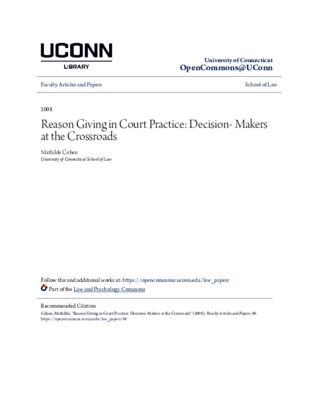 Reason Giving in Court Practice: Decision- Makers at the Crossroads

By Mathilde Cohen
Get PDF (1 MB)

This Article examines the thesis according to which the practice of giving reasons for decisions is a central element of liberal democracies. In this view, public institutions\u27 practice, and sometimes duty, of reason-giving is required so that each individual may view the state as reasonable and therefore, according to deliberative democratic theory, legitimate. Does the giving of reasons in actual court practice achieve these goals? Drawing on empirical research carried out in a French administrative court, this Article argues that, in practice, reason-giving often falls either short of democracy or beyond democracy. Reasons fall short of democracy in the first case because they are transformed from a device designed to protect citizens from arbitrariness into a professional norm intended to protect the judges themselves and perhaps further their career goals. In the second case, reasons go beyond democracy because judges\u27 ambitions are much greater than to merely provide petitioners with a ground for understanding and criticizing the decision: they aim at positively, and paternalistically in some instances, guiding people\u27s conduct. The discussion proceeds by drawing attention to social aspects that are often neglected in theoretical discussions on reason-giving. A skeptical conclusion is suggested: one can rarely guarantee that any predetermined value will be achieved by the giving of reasons. The degree to which individuals are empowered by the reasons given to them is dependent on the way in which decision-givers envision their reason-giving activity, and this representation is itself conditioned by the social setting of the court