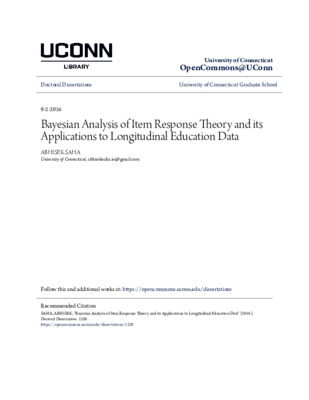 Inferences on ability in item response theory (IRT) have been mainly based on item responses while response time is often ignored. This is a loss of information especially with the advent of computerized tests. Most of the IRT models may not apply to these modern computerized tests as they still suffer from at least one of the three problems, local independence, randomized item and individually varying test dates, due to the flexibility and complex designs of computerized (adaptive) tests. In Chapter 2, we propose a new class of state space models, namely dynamic item responses and response times models (DIR-RT models), which conjointly model response time with time series of dichotomous responses. It aims to improve the accuracy of ability estimation via auxilary information from response time. A simulation study is conducted to ensure correctness of proposed sampling schemes to estimate parameters, whereas an empirical study is conducted using MetaMetrics datasets to demonstrate its implications in practice. In Chapter 3, we have investigated the difficulty in implementing the standard model diagnostic methods while comparing two popular response time models (i.e., monotone and inverted U-shape). A new variant of conditional deviance information criterion (DIC) is proposed and some simulation studies are conducted to check its performance. The results of model comparison support the inverted U shaped model, as discussed in Chapter 1, which can better capture examinees\u27 behaviors and psychology in exams. The estimates of ability via Dynamic Item Response models (DIR) or DIR-RT model often are non-monotonic and zig-zagged because of irregularly spaced time-points though the inherent mean ability growth process is monotonic and smooth. Also the parametric assumption of ability process may not be always exact. To have more flexible yet smooth and monotonic estimates of ability we propose a semi-parametric dynamic item response model and study the robustness of the proposed model. Finally, as every student’s growth is different from others, it may be of importance to identify groups of fast learners from slow learners. The growth curves are clustered into distinct groups based on learning rates. A spline derivative based clustering method is suggested in light of its efficacy on some simulated data in Chapter 5 as part of future works