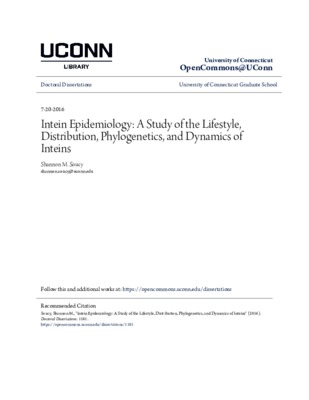 Intein Epidemiology: A Study of the Lifestyle, Distribution, Phylogenetics, and Dynamics of Inteins

Horizontal gene transfer (HGT) is an important process experienced by all cellular life on some level to enable rapid adaptation to changes in both the extracellular and intracellular environments. Quantifying the extent of HGT, as well as identifying conditions that both foster and deter HGT within both natural and artificial environments. As a solution we propose using mobile genetic elements to track the interactions between organisms, as well as the evolution of these mobile genetic elements to learn about HGT within various cellular communities. We use inteins to identify networks of HGT events within various collections of organisms that share a specific characteristic. Inteins are found in highly conserved proteins that are often part of the replication or recombination machinery. Though they are associated with highly conserved proteins in very slowly evolving sites (ATP or DNA binding) inteins have a surprisingly high substitution rate. The homing cycle, the canonical model for intein spread in populations, posits that this substitution rate can eventually lead to loss of the homing endonuclease domain generating a mini-intein. Mini-inteins are incapable of spreading into un-invaded exteins, and are passed down through vertical evolution only. Thus we can use the presence of the homing endonuclease domain as an indication of how the intein was acquired by each organism. We started by using a group of organisms that have an intein allele in common, then progressed to a group of organisms that are phylogenetically related, and finally used organisms that were isolated from the same environment to investigate networks of gene transfer and intein dynamics within these communities. We learned inteins are most often transferred between closely related organisms, especially those found within the same environments. We also show that inteins promote recombination during mating. We find that all three states of intein invasion (full-size, mini, and un-invaded) can co-exist within the same environment, debunking the homing cycle model, at least in prokaryotic communities