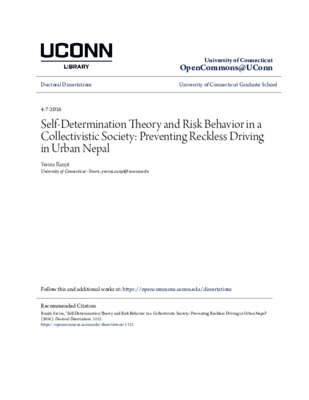 By Yerina Ranjit
Get PDF (1 MB)

Traffic road accidents are one of the leading causes of mortality in Nepal and around the world (WHO, 2011). Drivers in Nepal are not adequately educated about road safety rules, and regulations are also not strictly enforced. Public safety campaigns may be able to alter driver’s attitudes and behaviors, however, little is known about which persuasive strategies may be most effective. Drawing on self-determination theory and the health belief model, the current study used a post-only experimental design to test of the impact of collective v. individual appeals, and messages that emphasized that the choice to act was up to the participant (autonomy support) v. more directive language. Participants were Nepali college students (mean age 20, N = 199). The study found that individualistic messages had a direct impact on safe driving behaviors three weeks after exposure to the messages. Directive messages, rather than autonomy support, led to greater valuing of the point of the message (identified regulation), which in turn increased perceived susceptibility, perceived severity, and behavioral intention. None of the hypothesized moderators changed the relationship between variables. Further implications are discussed