Motivational symptoms related to effort expenditure have been associated with major depression and other disorders that afflict millions of individuals worldwide. In an effort to identify potential therapeutic agents and characterize the underlying biochemical mechanisms related to these behaviors, recent research has utilized animal models to study and characterize such behavior. Previous work in the Salamone lab produced evidence that rats with impaired dopamine (DA) transmission show changes in response allocation in tasks that measure effort-related choice behavior, which are characterized by a decrease in selection of the high-effort choice but increased selection of the low-effort alternative. The present work was undertaken to determine if pharmacological manipulations associated with depression-like symptoms can induce effort-based dysfunctions in rats, as measured by the concurrent fixed ratio (FR)5/chow feeding choice task. The present set of experiments were performed to determine if the effects of tetrabenazine (TBZ), a VMAT- 2 inhibitor that preferentially depletes DA, upon effort-related choice behavior can be reversed by adenosine A2A antagonism, to effectively restore normal behavior. Behavioral measures included both the number of lever presses and the amount of freely available lab chow that was consumed. The behavioral effect of MSX-3, an adenosine A2A antagonist, was compared against the well-established antidepressant bupropion. The data collected indicated that the effects of tetrabenazine on effort-related choice had a dose-dependent reversal when co-administered with MSX-3, as well as with the antidepressant bupropion. Thus pharmacological manipulations that produce depressive-like symptoms in humans produced effort-related choice impairments in rodents, which was then reversed by a putative antidepressant MSX-3 and the well-established antidepressant bupropion. The data obtained from these experiments support that adenosine A2A antagonists could ultimately be used to promote the development of novel treatments and therapeutics that target effort-related symptoms of depression, such as apathy, psychomotor slowing, and fatigue in humans 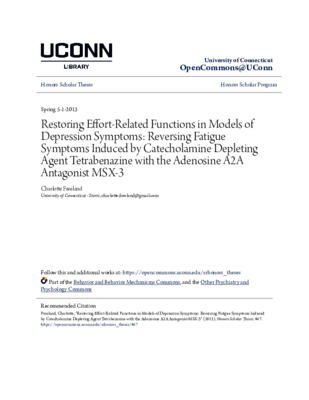 OpenCommons at University of Connecticut

This paper was published in OpenCommons at University of Connecticut.