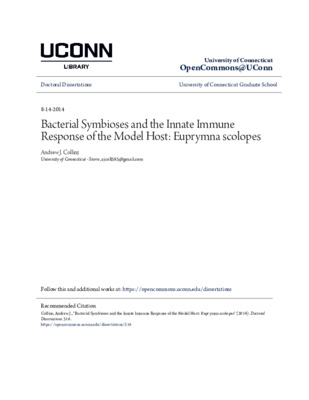 Bacterial Symbioses and the Innate Immune Response of the Model Host: Euprymna scolopes

All animals enter into beneficial relationships with bacteria. The light organ of the Hawaiian Bobtail squid, Euprymna scolopes, is a unique model for studying the establishment and maintenance of a symbiosis between a host and a single bacterial species, Vibrio fischeri. This bacterium inhabits a specialized structure known as the light organ and provides counter-illumination to mask the silhouette of the predator as it hunts for food during the night. Hemocytes, the primary innate immune cells, preferentially bind and phagocytose non-symbiotic at higher rates than their symbiont, but this can change with the colonization state of the animal. A goal of this work was to use high-throughput sequencing to identify genes expressed within hemocytes of adult animals. Of the many genes identified was a novel peptidoglycan recognition protein, EsPGRP5, which is one of the most abundant transcripts in circulating hemocytes. In addition to the light organ, female squid have an accessory nidamental gland (ANG) which contributes to making the jelly coat that covers the squid’s eggs. This gland is full of epithelium-lined tubules, most of which support a dense population of bacteria. Unlike the light organ however, the bacterial population in the ANG is a consortium of several species, not just one. This work characterized the bacterial symbionts within the ANG and showed that the population is partitioned, with certain tubules containing a single taxon. The dominant members of the ANG consortium are members of the ubiquitous Roseobacter clade, a group of marine bacteria within the Rhodobacterales. Several organisms were cultured from the ANGs of Euprymna scolopes. The genomes of these organisms were sequenced and analyzed for secondary metabolites. Among these were siderophores and homoserine lactones. The results of this work establish a database for future research into the molecular mechanisms of hemocytes. The presence of several genes can lead to the future characterization of many proteins and signaling pathways within hemocytes. This work also established the accessory nidamental gland as new model for consortial symbioses in E. scolopes. Comparisons between this new symbiosis and the light organ will shed light on how animals maintain many different bacterial communities