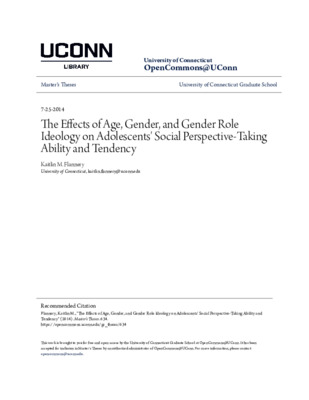 The Effects of Age, Gender, and Gender Role Ideology on Adolescents\u27 Social Perspective-Taking Ability and Tendency

The current research examined gender and age differences in adolescents’ social perspective-taking (SPT), or the social-cognitive ability to infer another person’s thoughts and feelings. This study aimed to demonstrate that SPT Ability and SPT Tendency are distinct constructs that should be considered separately. The influence of youths’ gender role ideologies on SPT also was considered. In a sample of adolescents ranging from ages 12 to 17 (N=158), participants reported their tendency to take the perspective of a specific same-age, same-gender friend, and also were assessed in their ability to use SPT in a hypothetical context. The results indicated that adolescents’ SPT Ability was not related to their tendency to engage in SPT within their friendship. Girls scored higher than boys on both SPT Ability and SPT Tendency. Both girls and boys were found to increase their SPT Ability across adolescence. For boys only, SPT Tendency decreased marginally from early to middle adolescence, and then “recovered” in later adolescence. Gender role ideologies predicted this tendency in boys, such that those with more stereotypical beliefs about males and females engaged in less SPT with their friends, especially among younger boys. Unexpectedly, gender role ideology was also associated with SPT Ability in girls. This study demonstrates the necessity of distinguishing between SPT Ability and SPT Tendency among adolescents, and highlights the importance of assessing gender role attitudes, as they play an integral part in explaining SPT