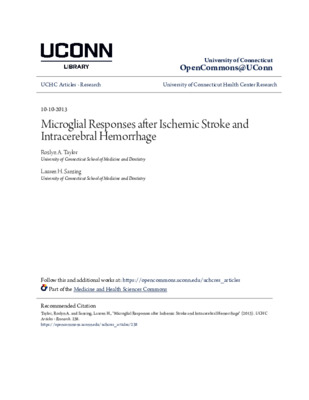 Stroke is a leading cause of death worldwide. Ischemic stroke is caused by blockage of blood vessels in the brain leading to tissue death, while intracerebral hemorrhage (ICH) occurs when a blood vessel ruptures, exposing the brain to blood components. Both are associated with glial toxicity and neuroinflammation. Microglia, as the resident immune cells of the central nervous system (CNS), continually sample the environment for signs of injury and infection. Under homeostatic conditions, they have a ramified morphology and phagocytose debris. After stroke, microglia become activated, obtain an amoeboid morphology, and release inflammatory cytokines (the M1 phenotype). However, microglia can also be alternatively activated, performing crucial roles in limiting inflammation and phagocytosing tissue debris (the M2 phenotype). In rodent models, microglial activation occurs very early after stroke and ICH; however, their specific roles in injury and repair remain unclear. This review summarizes the literature on microglial responses after ischemic stroke and ICH, highlighting the mediators of microglial activation and potential therapeutic targets for each condition