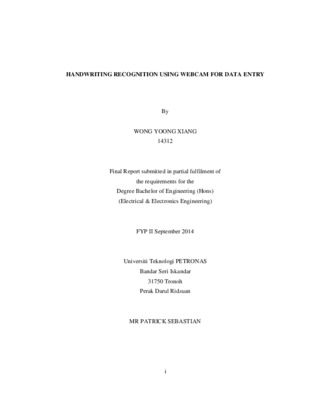 The Handwriting Recognition using Webcam for Data Entry project has its primary purpose to develop a system or algorithm that is robust enough to recognize numerical handwritings. A web camera is to be utilized to capture images of handwritten scores and question numbers on the examination score sheet in real time. It is then preprocessed and all the features are being fed into a neural network that is already been trained by various test samples. The outcome of the project should be able to obtain a system that is able to recognize handwritten numerical data with the lowest overshoot and errors. Several distinctive feature from each character is extracted using a few feature extraction methods, in which a comparison between three types of feature extraction modules were used. The first test was done with a neural network trained with only the Character Vector Module as its feature extraction method. A result that is far below the set point of the recognition accuracy was achieved, a mere average of 64.67% accuracy. However, the testing were later enhanced with another feature extraction module, which consists of the combination of Character Vector Module, Kirsch Edge Detection Module, Alphabet Profile Feature Extraction Module, Modified Character Module and Image Compression Module. The modules have its distinct characteristics which is trained using the Back-Propagation algorithm to cluster the pattern recognition capabilities among different samples of handwriting. Several untrained samples of numerical handwritten data were obtained at random from various people to be tested with the program. The second tests shows far greater results compared to the first test, have yielded an average of 84.52% accuracy. As the recognition results have not reached the target of 90%, further feature extraction modules are being recommended and an additional feature extraction module was added for the third test, which successfully yields 90.67%. With the timeframe target achieved, a robust data entry system was developed using web camera together with a user-friendly GUI (Graphical User Interface)