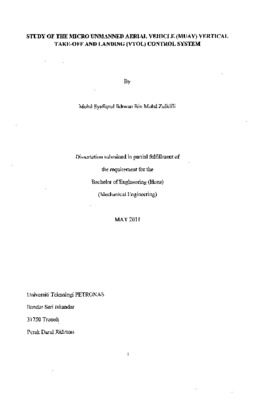 A stable Vertical Take-off and Landing Operation (VTOL) capability is very important for Micro Unmanned Aerial Vehicle (MUAV). It will enable the aircraft to conduct operation in such difficult situations. To achieve that, it becomes a main priority to have a suitable and good control system to control the stability of the MUAV's body during take-off and landing operations. The objectives of this project are to study possible methods of controlling the MUAV's VTOL operations, the quad rotor dynamic modeling concept of the MUAV as well as the control allocation for the MUAV's VTOL system. After that, the modeling and simulation processes will be conducted to the selected control allocation. As a first step, the literature review stage which covers the studies from various sources is done to get a proper idea regarding the MUA V and VTOL operation. The modeling and control allocation study is conducted to study the method in conducting modeling processes and control allocation involved for the control system. Along the process, the design methodology has been discussed along with an iterative algorithm derived. All the data, parameters and formulas have been validated during the data analysis and validation stage. After all of information have been gathered and validated, the control system has been modeled and simulated during the final stage of the project. In this stage also, all the characteristics and parameters have been adjusted and perfected to get the desired results. As for the results, the final control system is consist of a set of sensors that will give reading in x, y and z-coordinates. Besides, the self-programmable Microchip picl8f4431 processor also has been selected which the control system coding can be embedded. The selected microchip has the onboard highspeed analog digital (A/D) converter and the power pulse width modulation (PWM) module. The module on the microchip will convert the analog signal from the sensors to the digital signal so that it can be read by the motor driver. The motor driver will equally distribute and balance the power to all four of the MUAV's motors so that it can ensure the MUAV's body remains stable during take-off and landing operations