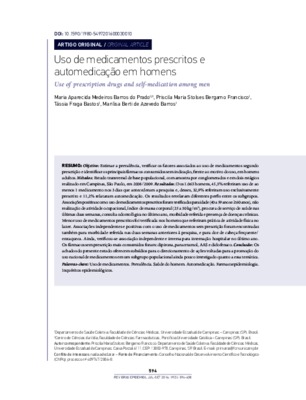 Objective: To estimate the prevalence, investigate factors associated with the use of medication according to prescription, identify the main pharmaceuticals consumed through self-medication, and the reason for this use among adult men. Methods: This cross-sectional population-based study with stratified clustered two-stage sampling was conducted in Campinas, São Paulo, Brazil, in 2008/2009. Results: Of the 1,063 men, 45.3% reported using at least 1 drug in the last 3 days. From them, 32.9% reported using exclusively prescribed medication, and 11.2% reported self-medication. The results revealed different profiles among subgroups. Positive associations with the use of prescription medication was found for age (40 – 59 and ≥ 60 years), failure to perform paid work, body mass index (25 – 30 kg/m2), having sought health services over the last 15 days, dental care in the last year, morbidity, and chronic diseases. Lower use of prescription medication was found among men who reported doing physical activities in their leisure time. Independent and positive associations with the use of nonprescription medications in the 15 days prior to the survey were found for reported morbidity and frequent headaches/migraine. Furthermore, there was an independent and inverse association for hospitalization within the last year. Over-the-counter medications consumed by men were dipyrone, paracetamol, acetylsalicylic acid, and diclofenac. Conclusion: The findings of this study provide information that can guide actions aimed at promoting the rational use of medication in a poorly investigated population subgroup regarding this topic. © 2016, Assocaicao Brasileira de Pos, Gradacao em Saude Coletiva. All rights reserved.19359460