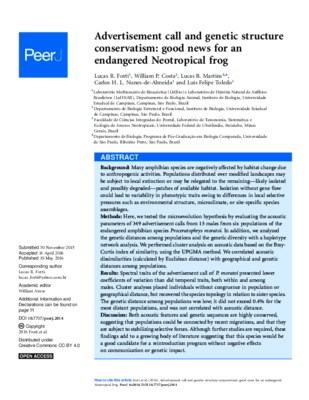 Background: Many amphibian species are negatively affected by habitat change due to anthropogenic activities. Populations distributed over modified landscapes may be subject to local extinction or may be relegated to the remaining-likely isolated and possibly degraded-patches of available habitat. Isolation without gene flow could lead to variability in phenotypic traits owing to differences in local selective pressures such as environmental structure, microclimate, or site-specific species assemblages. Methods: Here, we tested the microevolution hypothesis by evaluating the acoustic parameters of 349 advertisement calls from 15 males from six populations of the endangered amphibian species Proceratophrys moratoi. In addition, we analyzed the genetic distances among populations and the genetic diversity with a haplotype network analysis. We performed cluster analysis on acoustic data based on the Bray-Curtis index of similarity, using the UPGMA method. We correlated acoustic dissimilarities (calculated by Euclidean distance) with geographical and genetic distances among populations. Results: Spectral traits of the advertisement call of P. moratoi presented lower coefficients of variation than did temporal traits, both within and among males. Cluster analyses placed individuals without congruence in population or geographical distance, but recovered the species topology in relation to sister species. The genetic distance among populations was low; it did not exceed 0.4% for the most distant populations, and was not correlated with acoustic distance. Discussion: Both acoustic features and genetic sequences are highly conserved, suggesting that populations could be connected by recent migrations, and that they are subject to stabilizing selective forces. Although further studies are required, these findings add to a growing body of literature suggesting that this species would be a good candidate for a reintroduction program without negative effects on communication or genetic impact. © 2016 Forti et al.201