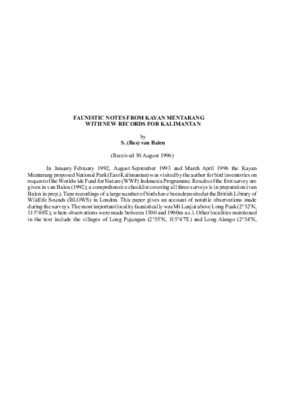 Faunistic notes from Kayan Mentarang, with new records for Kalimantan

In January February 1992, August September 1993 and March April 1996 the Kayan Mentarang proposed National Park (East Kalimantan) was visited by the author for bird inventories on request of the Worldwide Fund for Nature (WWF) Indonesia Programme. Results of the first survey are given in van Balen (1992); a comprehensive checklist covering all three surveys is in preparation (van Balen in prep.). Tape recordings of a large number of birds have been deposited at the British Library of Wildlife Sounds (BLOWS) in London. This paper gives an account of notable observations made during the surveys